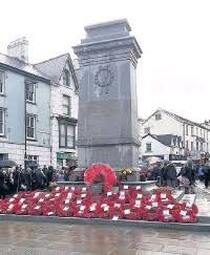 Centenary
On March 8th, 2023, we celebrate the centenary of our Cenotaph that stands proudly in the centre of Victoria Square which commemorates some eight hundred servicemen from the area covered by the then Aberdare Urban District and who lost their lives as the result of the Great War of 1914-1918. Though intended originally to commemorate the victims of the First World War, it now commemorates the dead in all wars in which British servicemen and women have fought. The 'Cenotaph' designed by F H .Morley of Durham was erected in 1923 in Victoria Square, commemorates their sacrifice.

​It would be appropriate here to dispel the long-held belief that there are only two cenotaphs in the entire British Isles one in Whitehall, Westminster, and the other in Aberdare. The word “cenotaph” derives from the Greek word “kenotaphion” meaning empty tomb, a memorial to those killed in war but buried elsewhere and simply means 'empty tomb', There are similarly named memorials at Blackpool, Bradford, Bolton, Harrogate, Hull, Liverpool, Llanelli, Llandudno, Manchester, and Swansea; there are many more examples.
Following the armistice, discharged soldiers began to return to their families. Welcome home parties were held, and War Heroes Funds were distributed. People began to recover from the shock of the war and Aberdare felt the need to commemorate its war dead.

The town enjoyed a certain eminence in the 19th and early 20th centuries; it was no idle boast that 'what Aberdare thinks today, Wales thinks tomorrow.' However, when it came to setting up a memorial to its First World War dead, it lagged behind towns of equivalent size, and even behind its own districts; Llwydcoed had its memorial in 1920, and Mountain Ash in 1922.

Public Support
​A public meeting of the townspeople of Aberdare was held on a Tuesday evening in 1919 to consider the question of erecting memorial to the fallen heroes from Aberdare and district. Aberdare MP and High Constable of Miskin Higher, Mr Charles B Stanton presided. The High Constable spoke and stated that a suitable memorial in the form of a Cenotaph should be erected in the centre of the town or at Aberdare Park with the names of the fallen heroes inscribed thereon.

This form of memorial was taken up in almost every town at present and he hoped Aberdare would not fall behind. Our neighbours at Mountain Ash had already commissioned Sir Goscombe John to erect a memorial funded in part by the miners of the district.

The meeting resolved a suitable memorial to be erected and to solicit support of the miners, railwaymen, teachers, all trades unions, and the chamber of trade. Even so, this did not take place until 1923, nearly three and a half years later
Divided Opinion
.Opinion was divided between placing the monument in the town centre or in Aberdare Park, which it was felt was a more reflective situation. Other voices argued for a structure with humility, such as a public memorial hall where choral societies and other cultural and social groups could meet. There was, in fact, a degree of strong opposition to the provision of an elaborate memorial. Among those particularly opposed to a decorative memorial were many who had fought in the war. For example, early in 1920, eight ex-servicemen's organisations of Aberdare and district met at Siloa Hall to voice their disapproval of the setting-up of a cenotaph as approved by the High Constable's Committee. They objected to money being allocated on 'cold granite' when there were so many war widows and suffering in the country. They made it clear that their preference was for a social centre as a suitable memorial to the fallen. Such a memorial, they considered, should be of service to the living.
Public Subscription
Funding of the new the Cenotaph was also an issue. It was largely paid for through the War Memorial Fund and public subscriptions. The Aberdare Branch of the National Association of Discharged Sailors and Soldiers had been very active in raising the money and on 21 March 1920 it held a concert at the Palladium for the war memorial fund. It was to be hoped that when the Cenotaph was unveiled it would stand free from debt, and with this object in mind the Lady High Constable, Mrs Illtyd Williams, and Mr. Ivor A. Bryant offered to receive further subscriptions from the public.

A few years later in 1922, the ex-servicemen of Aberdare and District formed a non-political and non-affiliated club to perpetuate that esprit-de-corps found so valuable and inspiring during the war and received a substantial grant from the United Services Fund which enabled the ex-servicemen to purchase Bryngolwg, a large house set in its own grounds on the corner of Cross Street and Wind Street, which had been owned by Dr. Evan Jones, an Aberdare doctor, as an ex-servicemen's club and institute.

A local committee had been formed to raise funds, consisting of Illtyd Williams, the High Constable; Charles Kenshole the town's leading solicitor; W. R. Morgan, the Clerk to the Aberdare Urban District Council (AUDC); and others, for the purpose of acquiring the property. In August 1922 the committee appealed to the public for money to place the club on a sound financial basis and to also to erect a Cenotaph. There was a generous response: Sir David R Llewellyn made a gift of £500 towards the cenotaph and £2,000 to the club and institute; Powell Duffryn Ltd donated £250 to the cenotaph fund and there were many other individual donations from local businessmen and the public.

The club, later popularly known as the ‘Shot and Shell' was opened by Sir David Llewellyn on Armistice Day 1922. At that time, it was the only club of its kind in South Wales. 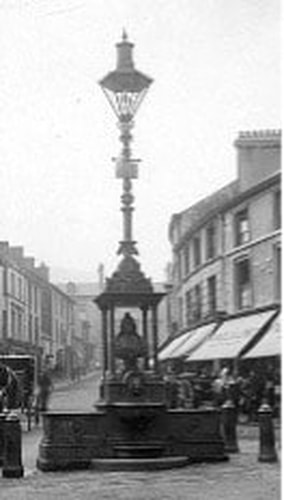 Victoria Square
The question of the Cenotaph however was finally resolved at another public meeting on 15 September 1922. It was unanimously decided that the memorial should be placed at a central site in Victoria Square, then occupied by the Queen Victoria drinking fountain, the gift of the first Lord Merthyr. The second Lord Merthyr, after having been approached, consented to its removal. The local authority was notified of the proposal and gave the scheme its approval, agreeing to move the fountain to another location in the town, and lay the necessary foundations for the proposed cenotaph. So poor Queen Victoria, as the drinking fountain had been termed by the sentimentalists had to vacate its prominent position in the Square and was waiting to be set up either in the open space opposite the lower park gates or in some other suitable spot to be designated by the authorities. However, it disappeared altogether from our gaze.

The cost of removing the fountain and laying the foundations amounted to £177.14.0d. At its meeting on 5 March 1923, the Council also agreed to take charge of the Cenotaph (AUDC minutes, 9 October 1922, 13 November 1922 and 5 March 1923). Several subsequent attempts were made to overturn the resolution to place the memorial in Victoria Square, with the result that its siting had to be reaffirmed by the Committee. Design
The Cenotaph cost about £1,200, and was a design by Mr. Francis H. Morley, A.R.l.B.A. of Durham. It was supplied by Messrs. D. H. and J. Newall, of Dalbeattie Granite Works, Dumfries, Scotland, and is after the style of the one in Whitehall. It consists of a base of three steps, the bottom being 20ft by 17ft., upon which stands the moulded column, with cornice on top, all cut from Dalbeattie grey granite. It is 20ft 6ins, in height, and the column 7ft by 4ft. in thickness.

On the front facing the old Boot Hotel, is inscribed :
''Their Name Liveth for Evermore," and on the rear, "Our Glorious Dead, 1914-1919."
These inscriptions in Welsh are cut out on the remaining sides.
“World War Two 1939-1945 and all other conflicts” were added later.
There is a separate granite tablet at the base to remember Falklands casualty Phillip Sweet 1982. 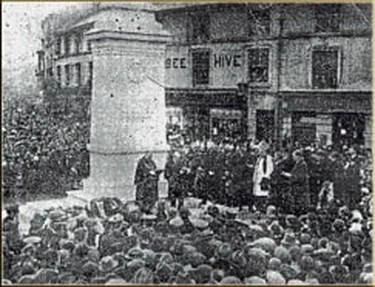 Unveiling
As to the unveiling a programme of the proceedings was put in place and efforts were made to have a visit from H.R.H. the Prince of Wales, Earl Haig, or Earl Beatty to perform the ceremony of removing the Union Jack, but other engagements prevented these individuals from complying with the request, and Sir D. R. Llewellyn of Bwllfa was asked to fulfil the role.An estimated crowd of 20,000 people attended the unveiling of the Cenotaph at Aberdare on the afternoon of Thursday, 8 March 1923.

A large parade, consisting of local dignitaries, the services, police, fire brigade, nurses, postmen, local and district councillors, the representatives of many other town organisations, and some two hundred ex-servicemen marched to Victoria Square. So large was the crowd that the barriers could hardly contain them, but they held fast with the police barely keeping a path open through the crowd for the procession. Because of the size of the crowd the band had great difficulty in reaching their allocated spot within the enclosure and it required the assistance of Superintendent Rees to persuade the crowd to open a path for them.

​Two hundred ex-service men had lined up outside the Club in Wind Street and were inspected by Col. Morgan Morgan of Mountain Ash. He spoke to some of the men and had scout Charles Henry Wiltshire, who was to assist in the ceremony, presented to him. The contingent then marched to Bute Street to join in the procession.
Orphaned Scout
After interdenominational prayers and hymns, Sir David Llewellyn, assisted by the orphaned scout wearing his late father’s service medals, removed the Union Flag from the memorial.  Scout Charles Henry Wiltshire was the son of Charles Henry Wiltshire, Devonshire Regiment, who was killed in action, (and whose name can be found on the war memorial in St Michaels Chapel, at St Elvan’s Church.).   A quartet of buglers (G.J. Lloyd, T.E. Irons, T. Davies, and J.O. Davies) sounded the Last Post, and the Vicar of Aberdare, the Rev. John Abraham Lewis, proceeded to dedicate the Cenotaph.

After the singing of the Welsh hymn “Bydd myrdd o ryfeddodau,” and sounding of the “Reveille,” the National Anthem was sung. Then followed laying of wreaths led by Scout Wiltshire, who placed one in the corner of the Cenotaph on behalf of the ex-servicemen. Wreaths were also placed around the Cenotaph by representatives of various public bodies and the relatives of the fallen heroes. At the close, a muffled peal was rung on the St. Elvan’s Church bells.
Dedication Speech
On removing the Union Jack Sir D.R. Llewellyn said: – “Mr High Constable and fellow-townsmen, I accepted the honour of unveiling this memorial because I knew most of the brave men whose memory we are honouring today; but I do so with a deep sense of unworthiness. I am proud that this Cenotaph has been placed on the most important site in the town. Just above you have a memorial to “Caradog” who taught the World that Wales is the land of song. How many of us, in those dark days of the war, saw our boys entrain from Victoria Station.”

“These brave men,” concluded Sir David, with deep emotion, “to whom we do honour today, together with the men I see about me, tackled theirs successfully; and we must now tackle ours in the same resolute ways. May God help us to do that?”
Handing Over
As chairman of the Cenotaph Committee the High Constable handed over the chart of the Cenotaph to Mr Evan Jones, J.P. as chairman of the local District Council in taking possession. Mr Evan Jones remarked he had no doubt that the Cenotaph would be regarded in great reverence and respect by the inhabitants, and he solicited the assistance of one and all in seeing that the Cenotaph was treated with that honour which was due to the memory of the brave dead. In their remembrance of the Great War, he hoped that they also desired that such movements as the League of Nations should be successful in the future in preventing further conflict.​
UA-212272543-1